How to have a good summer vacation? Bring a glass of lemonade, a few ice cubes, a deck chair and the August’s Prod Update with its latest production news and delivery table, perfect for refreshing your ideas!

Concerning the statues from the MUB and HQS ranges:

Regarding the doctor on board Tony Tony Chopper HQS, all address confirmation emails have been sent to make the final deliveries.

The same goes for the colossal United States of Smash HQS, Athena HQS+, Ichigo MUB, Saitama MUB, as well as the talented Kojiro Hyuga: Tiger Shot HQS and the inseparable ninjas Naruto & Kyubi HQS and Sasuke Uchiha HQS, whose all address confirmation emails have been sent. The sending of statues is still planned till the end of the third quarter of 2022.

Similarly, the last address confirmation emails have been sent for Sailor Moon HQSand Emperors Shanks HQS and Boa Hancock HQS+, whose voyage is expected to continue until the end of the year to moor at their port of arrival.

Concerning Aquarius Camus HQS, the plant was able to restart production after several weeks of shutdown following the restoration of the premises which had suffered the fire. Production was thus able to resume cruising speed while all address confirmation emails were sent, with deliveries scheduled until the end of 2022.

The villains just have to watch out, deliveries of Batman HQS+ have begun, with the first pieces at sea expected to arrive in Luxembourg around September, also being scheduled until the end of 2022.

The deliveries of the Toad Sage Jiraiya: One Last Heartbeat HQS should last until the second quarter of 2023.

The same goes for the reckless Saint Pegasus Seiya HQS+ whose deliveries should also last until the second quarter of 2023.

Shipments of the inseparable Gajeel & Wendy HQS+ will begin during this third quarter, being scheduled until the second quarter of 2023.

The same goes for the brave Zabuza & Haku HQS whose shipments are also due to begin during this third quarter, being scheduled until the second quarter of 2023.

Deliveries of the famous defender of the earth Goku Kaioken HQS have begun, with the first pieces at sea expected to arrive in Luxembourg around September. Shipments of his staunch opponent Vegeta Galick Gun HQS also began, with the first pieces expected to arrive in Luxembourg around October. Shipments of these two statues are scheduled until the third quarter of 2023.

The shipments of the flamboyant Natsu Dragnir MUB will start this month and last until the third quarter of 2023. We have received the prod samples in our workshop and are very happy with the result! These have just been sent to the Tsume Store Barcelona and Cinephil Store in Namur stores so that the most curious can come to see them.

Regarding Cygnus Hyoga HQS, we have made some improvements. Indeed, we have modified part of the ice sculpture at the level of the base as well as the position of the Saint’s left leg so that he is more visible. We also refocused his gaze to capture it naturally. The prod samples are being painted and the packaging is being printed and as soon as these are available, we will be able to show you the evolution. Deliveries of the statue must therefore begin during this third quarter to continue until the third quarter of 2023.

As for Frieza 4th form HQS+, we have received its T2 and are relatively satisfied with it, although we are planning some final revisions by continuing to improve the light sequences and the interlocking of the grass mainly. Regarding its estimated delivery period, please refer to the product sheet.

Regarding Andromeda HQS+, we will soon receive its T1, while you may always refer to the product sheet about its estimated delivery period.

As for Blackbeard ULTRA HQS, Trunks’ Time Machine Dioramax et The Joker & The Joker - Deluxe Edition – Dioramax, we are in the process of selecting the best factories to produce these ambitious statues. Regarding their estimated delivery period, please refer to their respective product sheet.

Regarding the statues from the Ikigai range:

Respected pirates Oden Ikigai and Zoro (Wano) Ikigai will continue shipping through the end of the year, as will ninja duo Naruto Ikigai and Sasuke Ikigai.

Regarding Gemini Saga Ikigai and Dubhe Alpha Siegfried Ikigai, we had to change factories in order to limit the delay caused by the fire in the initial one. Deliveries will therefore begin in the fourth quarter of 2022 to last until the second quarter of 2023.

As for the inimitable Perona Ikigai and Usopp Ikigai, we will very soon receive their prod samples and send them to the Tsume Store Barcelona and Cinéphile in Namur stores for exhibition. Regarding their estimated delivery period, please refer to the product sheet.

Regarding the father and son heroes Endeavor Ikigai and Shoto Ikigai and the best enemies Izuku Midoriya Ikigai and Katsuki Bakugo Ikigai, we have received their T1s which we are very happy with, some interlockings mainly remaining to be improved. Regarding their estimated delivery period, please refer to their respective product sheet. 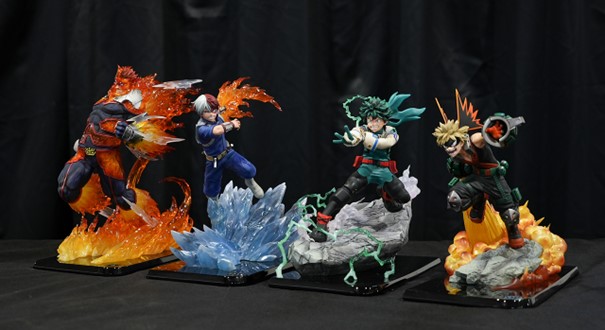 As for the dreaded Hades Ikigai, Poseidon Ikigai and Kuzan Ikigai, we have received their T2s which still need some work and will show their prod samples as soon as they are available. You can still refer to the estimated delivery period on their product sheet.

Concerning all the other statues not mentioned from the HQS, MUB and Ikigai ranges, please refer to the estimated delivery periods indicated on their product sheet.

We would also like to remind you that cases of force majeure linked to the health and geopolitical context are still relevant in view of their significant impact on our activity.

Finally, regarding the new head of Rei HQS and the gift of Grendizer HQS+, the factories have been selected. We will soon receive the T1 of the head while we fix the master tool of the Grendizer gift to start productions once fully satisfied with the production tests.

Thank you for your attention and now, here comes the delivery table! 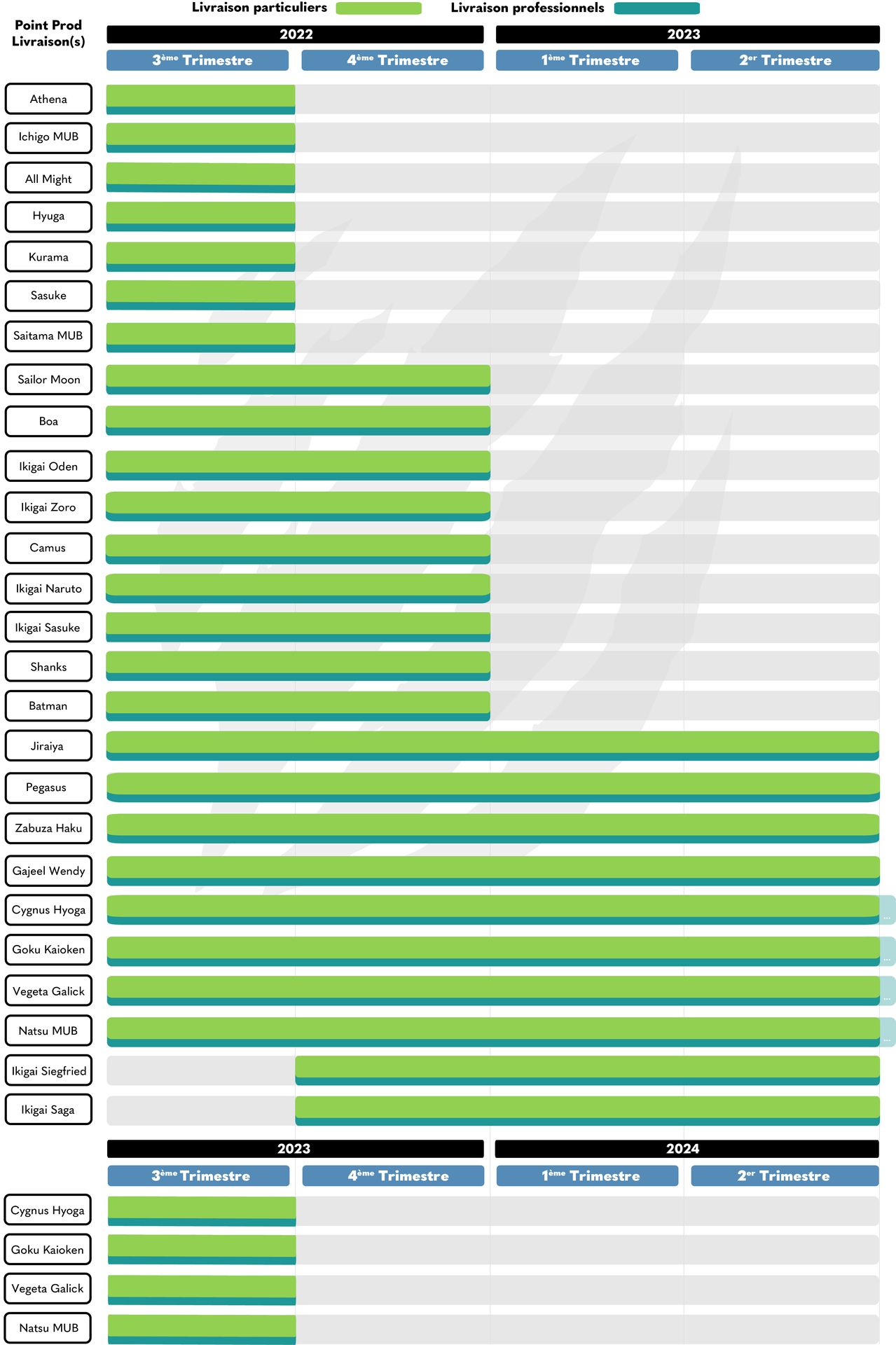 We use cookies to provide you a better user experience.